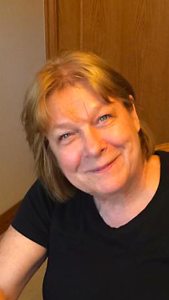 Mary Alice Policicchio has held the office of Appointed Designated Minister since March 13th, 2015 with the Church. Because of her distinguished record of service to her community as a Chaplain, she has been raised to the Ordered Ministry of Clergy Support Memorial Church as an Ordained Minister as of March 2nd, 2019.

Mary Alice regularly participates in webinars and conferences that will benefit and enhance her work.

Mary Alice’s chaplaincy has been active at the Sault Area Hospital, Sault Ste. Marie Jail and Treatment Center as well as the Young Offender Units (all ages), Palliative Care and On-Call Chaplaincy at the Hospital. At the F. J. Davey Home Long Term Care, her chaplaincy is very active and her duties include palliative care as well as coordinating spiritual care in a multi-faith environment.

Mary Alice has had over thirty-years of experience with official pastoral care as a chaplain but even before that people would talk to her and tell her their concerns and worries, “I can remember clearly being so comfortable when I realized that a Chaplain’s pastoral care meant just listening and never trying to fix the person. In my twenties I was asked to take a course in Family Therapy for my work. I was so uncomfortable with the concepts taught that I did not even complete the course (first time ever not finishing something I started). They taught us how to oversee as family session, disrupt the family and then after an hour have it all put back together again. This is not me.”

Mary Alice takes every opportunity offered to lead Worship: “I love to do the readings and prepare for a service and then to sit at the computer and let God put the words in my head and have them come out of my fingers.”

Mary Alice does pulpit supply, funerals and weddings for the community. “I cannot even begin to say how many, but I have supplied worship for the United Church, the Baptist Church and the Presbyterian Church. I also cannot give you the number of funerals I have done.”

Mary Alice applied for, and was accepted to sit on, the Palliative Care Knowledge Team to create and set the Standards of Care for Palliative Care for the Province of Ontario: “It was an honour to be included on the team.”

She is active in Bereavement Counselling, almost daily, at the Davey Home. “We have 374 residents and have an average of twelve residents die monthly. When I do funerals, I believe it is necessary to speak to the familys in preparation and that of course is grief counselling at its most needed.”

“My belief is that every family should be able to have the funeral that is important to them and will allow them to grieve as they need to. I have done Christian, non-Christian and secular funerals as needed.”

In her position at the Davey Home, Mary Alice does the monthly memorial services.

All Mary Alice’s work experience has included counselling, starting with her MRC certificate, continuing with her Gerontology certificate and on to her degree in Religious Studies.

“I do remember times where I helped in marriage counselling, abortion decisions with women, parents with children and some with disabilities. Many times talking to families with of new diagnoses of epilepsy. My oldest son was diagnosed with epilepsy at the age of three. He is a functioning member of society due to his intelligence and my commitment to have everyone he met treat him equally and normally. Not saying this has been easy for him or for our family. It is too long to tell the story but even his diagnosis was proof that God was active in my everyday life.”

“Presently, I offer study Groups at the Davey Home. We regularly do morning devotions by reading “Our Daily Bread” and “The Word Among Us”. I also like to offer special programs for Bible studies. I have offered the World Day of Prayer study for almost as long as I have been at the Davey Home. We are doing Slovenia this year with the worship service and a luncheon. I offer special Christmas studies and Lent studies.”

In the past, I have offered a community women’s study group called Lavendar Springs (but it did not bring in the numbers I had hoped for). I find these Bible Study programs at Christianbooks.com, among other sources. For example, the elders from the Victoria Presbyterian Church are presently studying “The Emotionally Healthy Church” by Peter Scazzero.

Presently I read and attend webinars by:

Mary Alice reads for relaxation and enjoyment but there are also a few books and authors that have influenced her over the years:

Historically, Mary Alice participated in a variety of clubs but it has been a while since she has attended some as her children came to her in middle life and she spent time with them.”

Spiritual Dimensions of my Life

Mary Alice’s life has always had a spiritual dimension for as long as she can remember. Church was something her mom took her and her sister to and faith was something discussed regularly by her family.

“I remember early in my life (before my teens) experiencing the mysticism of being a Christian and prayer being an integral part of me. I sang in the youth choir and taught Sunday school. There was a young people’s group that was very active as well. I can remember sitting in the choir looking out at the congregation wondering if they felt God in their life the same way I did.”

“I did not pursue theology right out of high school as I was too young and felt that I would not be able to do the funerals and that as a single reverend I would never marry and it was important for me to have children. My parents could not afford to send me to Southern Ontario to attend school and therefore I chose to serve God by caring for handicapped children.”

“If you notice by my work experience, God still captured me to do his work even in a round about way. You can definitely see His hand in my employment journey. I became a Chaplain before I had completed the educational requirements. It wasn’t until I was in my mid-thirties and finally gave God the control of my life that I got everything I wanted.”

“I could go on about the depths of my dependence on God but would like to just express one more concept. I have experienced the active evil in this world and know that prayer is the first and only way to combat it.”

“God is the Director of my life. He puts me where he needs me and gives me everything I need when I am there.”

Mary Alice has always worked from the time she babysat as a teenager. Her first job was in a grocery store working for her grandfather: the perfect place to learn customer service. She also worked as a camp counsellor, in playgrounds and at the local beach. During that time, she worked with 7- 12 year old children and campers with intellectual disabilities.

After graduation, Mary Alice worked with children with disabilities in a residential setting in London, Ontario. Wanting to return to the north, she began work for the Ministry of Training, Colleges and Universities as a Teaching Master in the program she had recently graduated from.

A little while later, Mary Alice returned to working with people with intellectual disabilities.

For nine years, Mary Alice was Supervisor of a program at the local hospital that provided activity for the Chronic Care Residents.

Mary Alice then moved on to become Chaplain at the Sault Ste. Marie district jail. After it  closed, she became the North East Regional Manager of the Ontario Multifaith Council for two years.

When the brand-new full-time chaplain’s position became available at the Davey Home, Mary Alice was successful in obtaining the position and returning to Gerontology, where she continues to work today.

During this time, Mary Alice also did a part-time Community Chaplains position, offered by the Ontario Multifatith Council. She also did pulpit supply whenever asked for, vacation relief and for four years she filled in every Sunday at her local church until they were able to obtain a full-time minister for the position.

Mary Alice loves all homemaking things: cooking, sewing, knitting, crafts etc. She  makes a receiving blanket for each of the Davey Home staff that are expecting a baby. It is her way of giving them something for the new baby.

Mary Alice also loves to be outdoors whether it’s sitting in her beautiful backyard, walking, camping or spending time at the beach.

Mary Alice loves spending time with family and friends, enjoying friendships that she has had since childhood.

“My life rotates around my husband and children and I always have time for them. My husband has a hobby farm which I help with sometimes. My children turned out to be athletic and therefore we followed the athlete that had Policicchio on the back of the jersey. My oldest son played soccer. My second son played hockey and is presently an OHL Official so we watch him referee regularly. My youngest, who as a girl excelled at all sports – OFSSA track and basketball in high school – earned a full ride basketball scholarship at the University of Idaho and I did not miss a game whether on the computer or live.”

“Being ordained is a long-time wish of mine. I can’t say it was a goal because I did not pursue what was needed to be done to gain that goal. It was a wish that I didn’t think would come true because of necessary and realistic choices I made at certain times in my life. It is something that will bring fulfillment to my career. I am grateful for this honour.  Words do not give justice to my thankfulness. I am truly grateful.”